Company
Profile
Our Businesses
Our vision, mission and values
Our commitment to you
Our Leaders
Engaging the Community
Awards and accolades
Others
COVID-19 Care Initiatives
112 Anniversary

Retirees who did not plan for retirement at Greater Risk of Financial Exhaustion, Great Eastern Survey Reveals

Singapore, 31 August 2021 – Leading insurer Great Eastern revealed in its “The State of Retirement in Singapore” survey that retirees who did not plan for their retirement and depended on a monthly retirement income (mainly from past savings, CPF payouts and family members’ allowances) of S$1,200, were barely meeting their basic monthly expenses and were left with only S$30 extra* each month. This translates to about one dollar a day, which does not enable them to meet unexpected or additional expenses such as medical costs should they fall ill.

There are clearly advantages to early planning and doing so with professional advisory to secure financial independence later in one’s retirement years.

The survey findings showed that retirees who started planning before age 50, were in a stronger financial position with an average of S$625 extra* to spend monthly for any unplanned expenses. This is 20 times more as compared to those who did not plan for their retirement ($30). In contrast, retirees who planned after age 50 had S$300 extra to spend as compared to those who planned before age 50.

Financial stability was strongly linked to contentment in retirement, with respondents

Findings showed that retirees had to adjust their lifestyle expectations to manage their actual retirement incomes. They were also notably more vulnerable to large unexpected expenses, not having planned for their retirement holistically to take into account items such as medical costs which could easily snowball into sizeable amounts. In an earlier survey on critical illness (March 2021), Great Eastern found that more than S$250,000 was spent on medical and hospitalisation bills for Critical Illness patients and their caregivers1, leading to the rise of inadequacy of income for other necessaries.

Rising Singlehood, Lower Birth Rates, and a call for Women to be Financially Independent

The top three income sources of the survey respondents were past savings (56 per cent), CPF payouts (43 per cent) and allowances from family members (41 per cent), which formed the bulk of their income during retirement.

The survey also found that women did not prioritise their financial needs as much as men. Women were much more dependent later in life on their children and family members for monthly allowances (45 per cent) than men (39 per cent); and had less investment income (18 per cent) than the men surveyed (31 per cent). These findings point to a lack of financial preparedness affecting self-sufficiency during retirement years for women.

Data from Singapore’s Census 2020 has shown that singlehood and childlessness are on the rise2. This means that women are likely to be their sole financial contributors in life. Thus, it is important for them to prioritise retirement planning as life expectancy is expected to reach age 85.4 for women in Singapore by 2040.

Colin Chan, Managing Director for Group Marketing, Great Eastern said: “With longer life expectancy and the rising cost of living in Singapore, proactive retirement planning and starting early is more important than ever. While retirement planning might be a distant concern for many of us, the many uncertainties in recent times impacting people’s job security is a reality. We encourage people to get started early, no matter how small, so that they can have the freedom to make their own decisions to lead their desired retirement lifestyle with the help of professional advice.”

“As a leading insurer committed to improving people’s lives, we want to help and educate them to plan holistically so that they can live #Lifeproof. This includes looking at their long-term care needs as part of their retirement plan and plugging financial planning gaps, taking care of unforeseens which may arise later in life”, he said.

To encourage people to become financially independent and be empowered to make their financial decisions even after retirement, Great Eastern has launched “Don’t Lose the Freedom to Make Your Own Choices” campaign. This campaign reiterates the importance of leading our desired retirement lifestyles through forward retirement planning with Great Eastern’s financial storyboard tool. The campaign will be shared on various digital platforms.

”The State of Retirement in Singapore” Survey

Great Eastern’s survey was conducted in May 2021 with 304 respondents above age 63 in Singapore through an independent research consultancy. Online and qualitative interviews were conducted to better understand the current state of retirement in Singapore.

Annex A – Survey infographics and other data 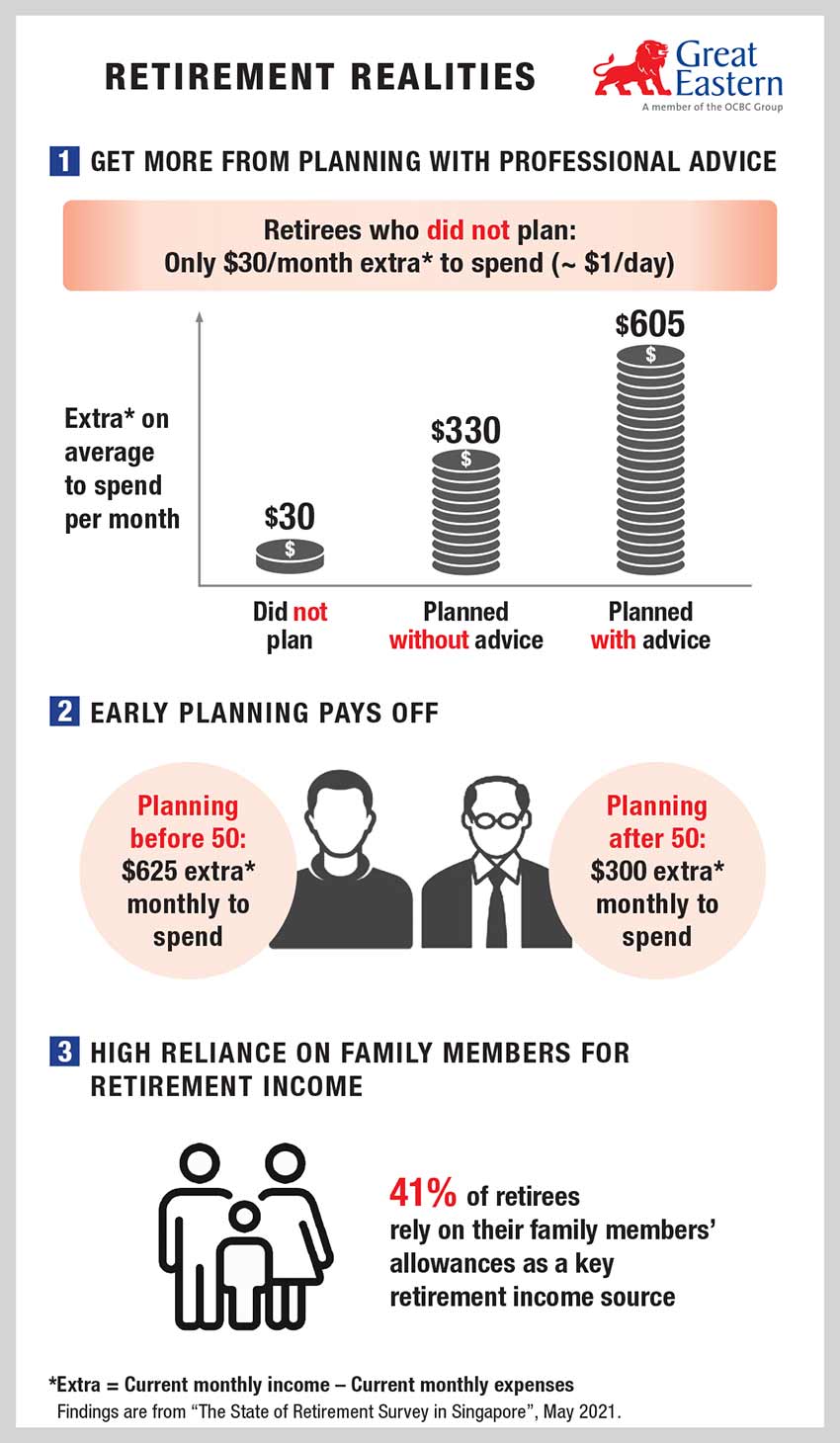 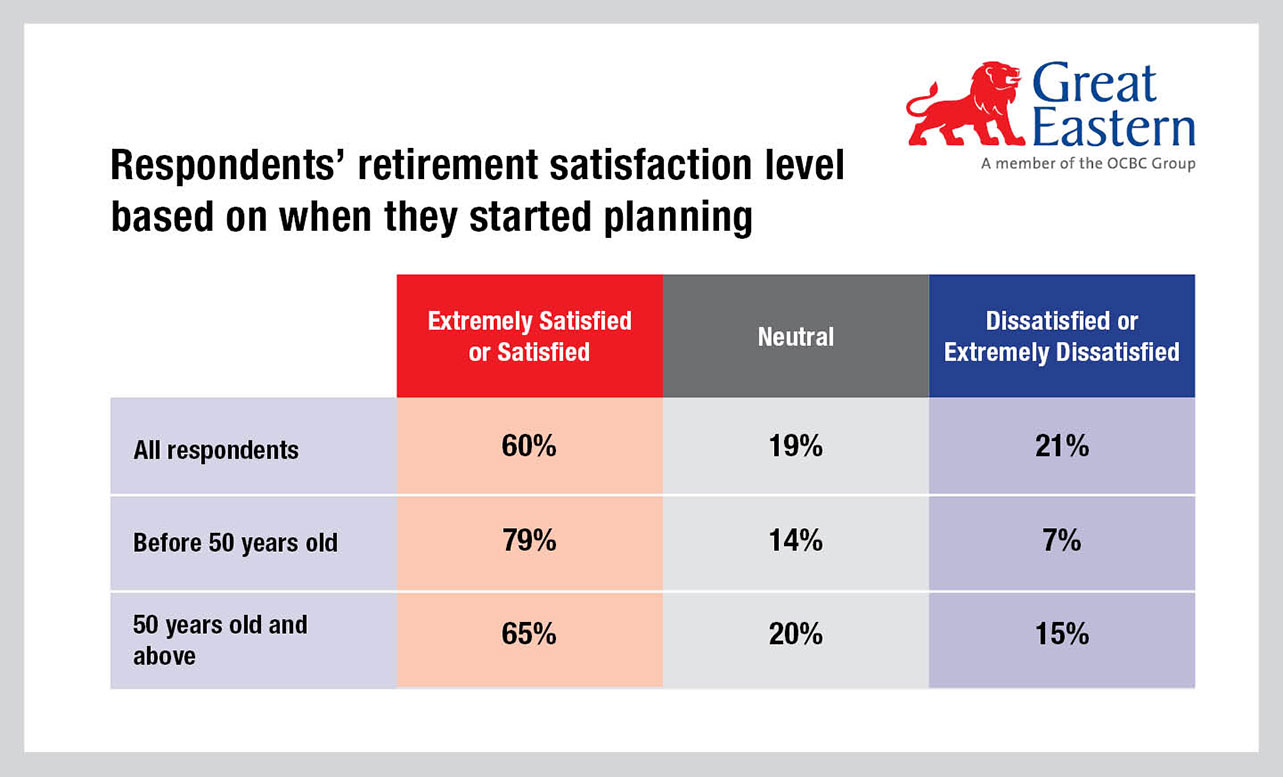 Great Eastern has launched GREAT Retire Income and GREAT Lifetime Payout plans which give customers’ the choice to receive either monthly payouts over 10 or 20 years, or a lifetime of monthly cash payouts to help them achieve their financial freedom. For GREAT Retire Income plan, customers will be protected against disability if they are unable to perform two out of the six Activities of Daily Living3 during the payout period. Customers may purchase the plans via Great Eastern’s financial representatives or through OCBC Bank.

*Please refer to Annex A.