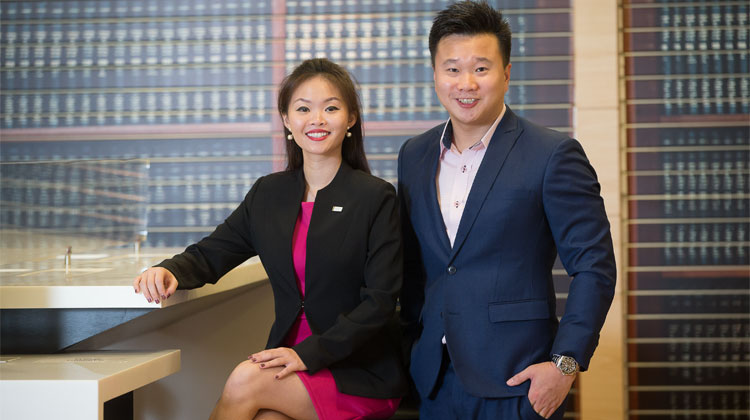 Both Ms Tai and Mr Ang cherish the relationship they have developed with their clients at Great Eastern. PHOTO: RAY CHUA

MS SAMANTHA Tai might be young, but the bubbly executive financial consultant has strong ambitions.

“In five years’ time, I hope to be in senior management. I want to build my own team of like-minded individuals who will work to change the perception of the insurance industry,” she says.

The 24-year-old National University of Singapore (NUS) graduate says that some people still regard an insurance job as a sales-based one.

She hopes to change this view as she believes that insurance is “a fundamental building block to a holistic financial plan”.

The bachelorette joined Great Eastern’s internship programme during her third year of university in 2014 before she decided to become a financial consultant.

She says: “I cherish the trust that my friends and clients have given me. The relationships I have built are a fulfilling part of the job.

“When they tell me that I am reliable and they feel their money is safe with me, that is a great affirmation. It’s also gratifying to provide them with greater peace of mind and a safety net for life’s unexpected turns.”

Besides the meaningful relationships that she is able to form through her job, she says it also gives her a decent income. Even as a full-time student, she was earning as much as what a typical fresh graduate would make. This helped her to pay her university fees.

Though she has been in the industry for only three years, she says Great Eastern has given her the proper foundation and training to serve her clients. She started with about 25 to 30 clients, but now has more than 300 customers.

The company has its own training facility in the Central Business District called the Centre for Excellence, where regular enrichment workshops and sales and product training are conducted.

“I just attended a training session on speaking and how to better present myself,” says Ms Tai.

“Great Eastern offers a variety of courses so we can constantly develop our skills.”

She says the company also ensures that it is up to date with technology. There used to be a lot of paper work but with everything now digitised, the administrative aspects of her work have become more convenient. She just needs her laptop instead of a stack of forms when meeting clients.

She believes that to be a good financial consultant, one needs self-discipline to manage one’s time, as well as the tenacity and perseverance to face rejection.

“The job requires a lot of self- motivation. There are infinite possibilities at Great Eastern. The harder you work, the further you can go,” she says.

Executive financial consultant Ang Jin Hui works seven days a week, but enjoys a flexible schedule. In fact, he does not consider most of what he does to be work.

The 30-year-old bachelor has about five appointments a day but every day is different. His meetings could be early or late, with some held over breakfast or even supper.

He feels that his work goes beyond selling insurance. When his clients share their priorities, financial needs and goals with him, their relationship changes over time.

From a working relationship that initially focuses on wealth management and retirement advice, it can develop into a lasting friendship. He appreciates invitations to his clients’ homes for dinners and celebrations, and feels like a family member.

Though most of his time is spent meeting clients, the NUS graduate swims or runs for about two hours twice a week. He also finds time in the afternoon to watch a movie or read a book in a café, as well as study for financial exams to upgrade his skills.

Mr Ang, who has a graduate certificate in management science and engineering from Stanford University, joined Great Eastern as he was interested in private wealth management and entrepreneurship.

“At Great Eastern, I have the opportunity to build up my own team of financial consultants, which is similar to starting my own company,” he says.

He joined the company in July last year but has already started managing a team of four financial advisers.

Although he has received job offers from other banks and insurance companies, he wants to develop his career at Great Eastern as he feels it is a home-grown company that delivers on its promises.

He notes that the well-established company, which will celebrate its 110th anniversary next year, is part of the Oversea-Chinese Banking Corporation (OCBC) group. Great Eastern is the only insurance company in Singapore that is a subsidiary of a bank.

The most rewarding aspect about his job is that it allows him to give back to society.

For instance, he found it meaning- ful to offer financial advice to a 28-year-old single mother who did not know about plans that could help support her nine-year-old daughter’s future education, even with her low income.

“I helped her set up a plan so that she can save for her daughter’s junior college and university fees,” he says.

“She thanked me because she had not thought about it. That’s all part of what makes the job worthwhile.”

As a home-grown brand and one of the most established insurance companies in Singapore and Malaysia, Great Eastern has been providing innovative financial solutions and services to generations of customers for 109 years. As a Life company, it has gone beyond the call of insurance to empower customers and the community to live healthier and better.

Central to this is the Great Eastern agency force, a core distribution channel for the company. Key resources are invested to continuously develop the channel, including investing in programmes such as The Great Internship, which brings together undergraduates from local universities and practitioners from the industry in a mentor-mentee environment.

During the 10-week programme, interns are given insights into the financial service industry and potential career prospects, as well as taught the fundamentals of insurance advisory.

Great Eastern is committed to helping its people grow with the company and realise their fullest potential. Those seeking to join its agency force can look forward to a dual career path — as a financial advisory professional or a management personnel who focuses on building and leading teams.

"At Great Eastern, I have the opportunity to build up my own team of financial consultants, which is similar to starting my own company."

"The job requires a lot of self-motivation. There are infinite possibilities at Great Eastern. The harder you work, the further you can go."